Norwegian foreign policy, security and climate, citizen security and welfare models were among the topics discussed when NOREF, with Norwegian and Colombian partners, hosted a visit from the Colombian War College’s Course on Advanced Military Studies (CAEM).

The CAEM group met with representatives from the Norwegian Ministry of Foreign Affairs, the Storting, the Norwegian Armed Forces, the Norwegian police, civil society, and researchers from leading Norwegian research institutions. The programme included both discussion on current issues in Norwegian foreign policy, the Colombian peace process, the Women, Peace and Security agenda, citizen security, the link between security and climate change, and welfare models. In addition to the stay in Oslo, the group also visited Kirkenes and the Norwegian border areas to learn about the security implications for Norway of the new geopolitical security climate. 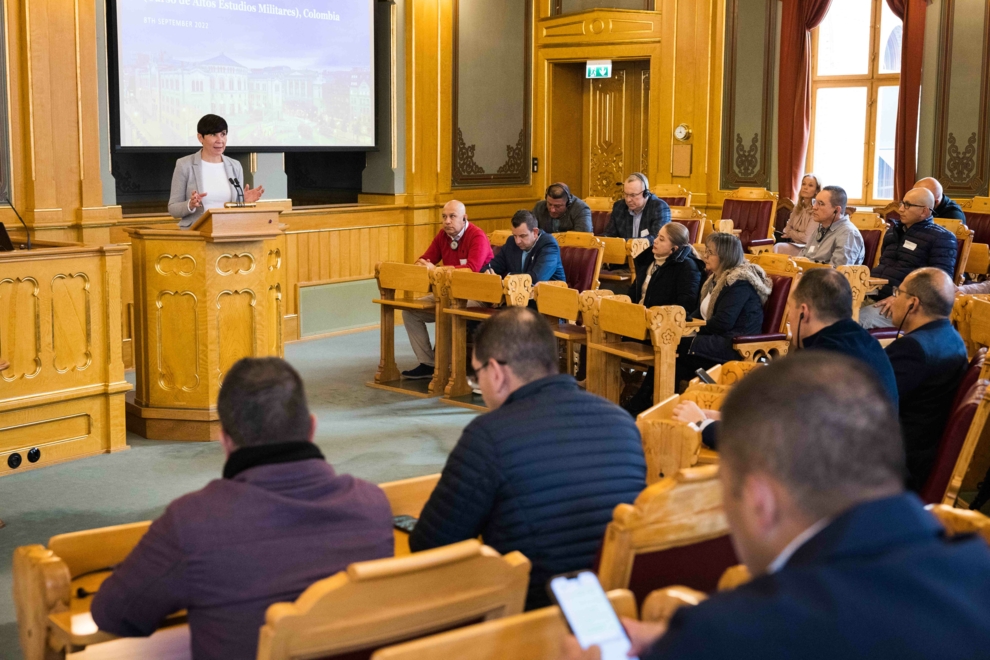 Chair of the Standing Committee on Foreign Affairs and Defence, Ine Eriksen Søreide, greets the officers at the Storting. Photo: Stortinget

Norway has been engaged in dialogue with the Colombian military for 22 years. This initiative aims at engaging with members of the country’s security forces on the need for a lasting and sustainable peace, and at building trust among the various sectors of Colombian society. This was the fourth visit of its kind since NOREF joined the project in 2014 and it builds on NOREF’s solid partnership with the Social Development Group and the Norwegian Embassy in Bogotá.